How wide is the influence? What are the hot exhibits? The fourth China International Import Expo Communication influence report was officially released. For more information on export to China, please call SINOLOBEN, service Email: sinoloben@sloben.com. 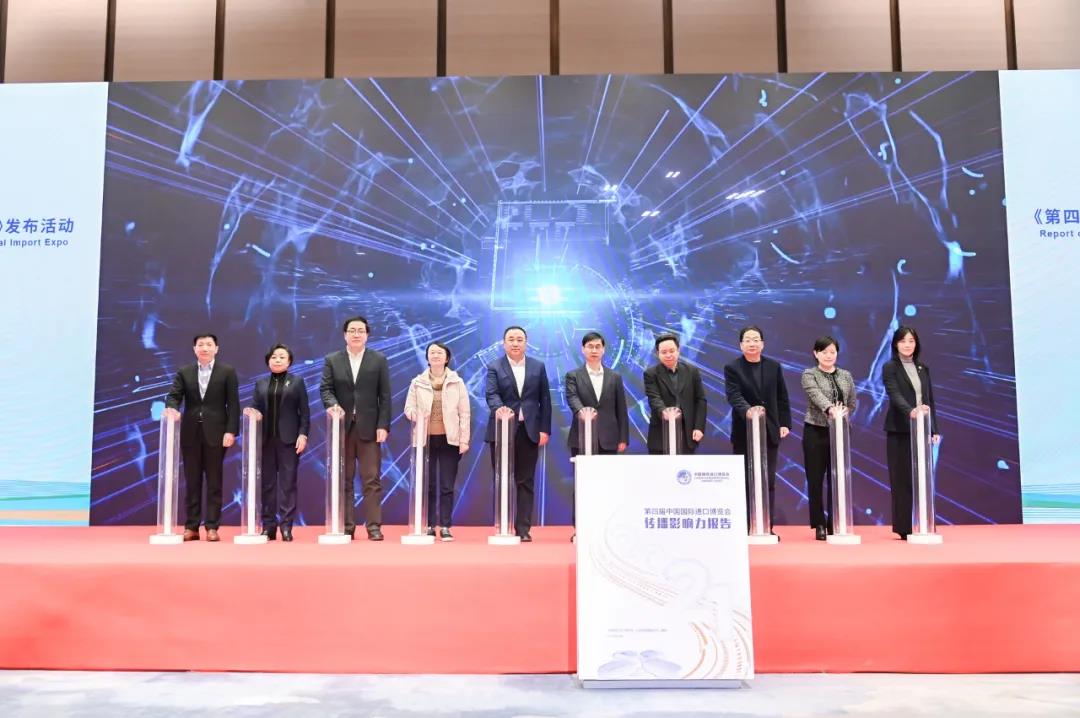 In the whole year, the total amount of relevant news reports and other information exceeded 2.45 million! The much-watched Expo handed in its "year-end report" on its communication influence at the end of 2021-the fourth China International Import Expo Communication influence report (hereinafter referred to as "the report") was officially released today. "win-win cooperation" has become the hottest word in the blog, and 12 popularity lists of exhibitors, supporting activities and media organizations have been released at the same time.


Exhibitors, trading groups, supporting enterprises, organizers of supporting activities and people-to-people exchange activities, as well as representatives of media organizations and other units jointly witnessed the release of the report.

Sun Chenghai said in his speech that the successful holding of the fourth Expo has demonstrated China's great achievements in epidemic prevention and control and economic and social development, and has made important contributions to promoting economic globalization and building an open world economy. With the active efforts and strong assistance of all parties, the communication work of the fourth Expo has achieved remarkable results, the omni-directional, multi-angle and three-dimensional communication momentum has become more significant, and the communication influence of the Expo and various participants has been continuously enhanced. He said that news publicity is one of the core competitiveness of the Expo, and the continuous expansion of communication influence is the inherent requirement of "getting better and better", which is inseparable from the strong support of all parties. In the future, we hope that all participants will, as always, pay attention to, participate in and support the Expo, and join hands to promote the continuous expansion of the influence of the Expo.

Dong Mengjun, Executive Director of the Public opinion data Center of people's Daily online, interpreted the report. According to the report, the spread of the fourth Expo shows four major characteristics: first, it has realized the continuous surge of the "6: 365" effect, writing "never ending"; second, the total amount of overseas information has increased significantly. the number of countries participating in the publicity and reporting of the Expo and the number of foreign media have increased, contributing to the efforts to tell Chinese stories and convey Chinese voices. Third, mass dissemination of a wide range of issues, many angles, to maximize the effectiveness of publicity optimization; fourth, new technologies, new forms of media coverage, multi-dimensional, multi-platform display of the grand exhibition, "Expo Live" is to attract more than 100 million onlookers.
"win-win cooperation", "opening wider to the outside world", "consumption upgrading" and "RCEP" have become popular words, fully demonstrating China's determination to share its own development opportunities with the world and promote the sustainable development of the world economy. "cutting-edge technology", "green and low carbon", "debut" and "people-to-people exchanges" have also been repeatedly mentioned, showing the new trends and characteristics of this Expo.

Among the six major exhibition areas, the technology and equipment exhibition area has become the most concerned exhibition area of this Expo with its cool exhibit shape and the scientific and technological level of "hard core". Among the many popular exhibits on the list, the "YSL Intelligent toner" which can privately adjust thousands of kinds of lipstick and the largest "bluefin tuna" imported from Shanghai are in line with the people's pursuit of quality life and reflect the potential of upgrading China's consumer market. Wearable glucose detection system, mind-reading ping-pong robot, third-generation AI intelligent cleaning robot and other "high-precision and new" exhibits have excellent eye-attracting ability, depicting a beautiful picture of life in the future.
Among the participants in the Expo, exhibitors such as Siemens (technology and equipment exhibition), L'Or é al (consumer goods exhibition), Danone (food and agricultural products exhibition), Christie's (service trade exhibition), Bayer (medical devices and health care exhibition), Michelin (automobile exhibition) and other exhibitors have won high popularity among supporting enterprises. The Shanghai Trading Group and others have attracted much attention among the major trading groups; supporting activities such as the 15th "Belt and Road Initiative" Forum on Ecological Agriculture and Food Safety have been widely reported; and the exhibitions of people-to-people exchange activities brought by Shanghai and other places have been welcomed by the public.

At present, the preparations for the Fifth Expo have been launched in an all-round way. taking the enterprise business exhibition as an example, the booking area of the exhibition has exceeded 180000 square meters, which is faster than that of the same period last year.

PreviousThe new beef export policy of Argentina has been announced, and the export restrictions to China have been technically liberalized, and the policy will continue until 2023
NextThe first year of interest rate hike by the Federal Reserve-- the Prospect of G7 and RMB Exchange rate in 2022.