RCEP will come into force in January

RCEP will come into force in January. For more information on export to China, please call SINOLOBEN, service Email: sinoloben@sloben.com. 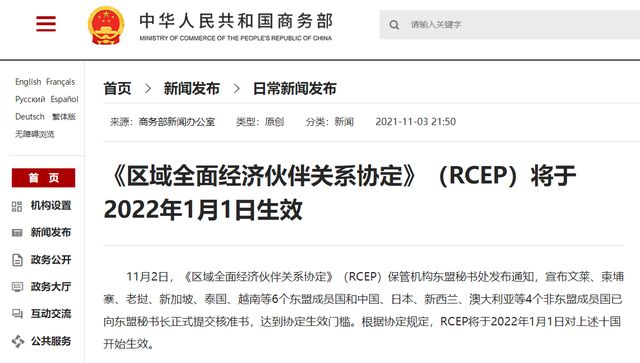 The world’s largest trade deal, The Regional Comprehensive Economic Partnership or RCEP will come into force in January next year.

RCEP was signed last year by 15 Asia-Pacific countries. The countries are the 10 members of the Association of Southeast Asian Nations and five of their largest trading partners China, Japan, South Korea, Australia and New Zealand.

RCEP will be in force 60 days after a minimum of six ASEAN members and three non-ASEAN signatories ratify the agreement. ASEAN countries that have ratified the deal so far are Brunei, Cambodia, Laos, Singapore, Thailand and Vietnam. Other countries outside ASEAN that have ratified RCEP are China, Japan, Australia and New Zealand.

RCEP covers a market of 2.2 billion people and $26.2 trillion of global output. The partnership will create a trade grouping that covers about 30% of the world’s population, as well as the global economy.

For further information about China's imports and exports, please contact: