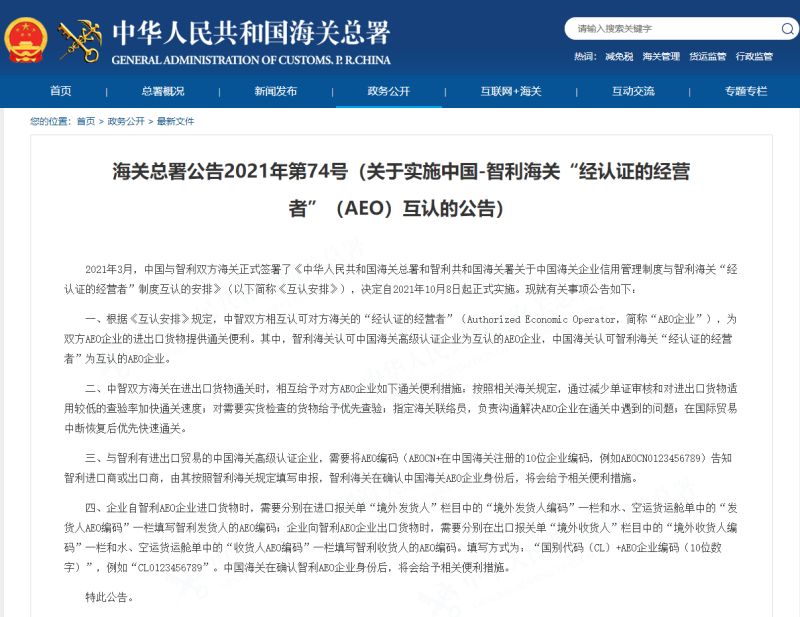 An agreement on mutual authorized economic operator (AEO) status signed between China and Chile went into effect on Oct 8, offering easier customs clearance for exporters from both countries, said the Chinese customs.

This is China's first AEO mutual recognition officially implemented in South America, according to the General Administration of Customs.

Under the agreement, companies that obtain the AEO status in the two countries will enjoy simplified customs procedures, such as reduced examination and prioritized clearance, which will significantly shorten customs clearance time and reduce costs at ports as well as for insurance and logistics.

Chile is China's second-largest trade partner in South America. The trade volume between the two countries totaled $42.19 billion in the first eight months of the year, up 50.1 percent year-on-year, GAC data showed.

During the period, a total of 883 Chinese companies with AEO status exported to Chile, with the combined export value accounting for about 18.9 percent of China's total exports to Chile.

The AEO system, initiated by the World Customs Organization, is aimed at facilitating customs clearance for enterprises with outstanding records in terms of legal compliance, credit rating and safety.

By the end of August, China had signed AEO agreements with 46 countries and regions including Singapore, the Republic of Korea and the European Union member states.

The country will further promote AEO mutual recognition cooperation with countries including Russia, Turkey, Argentina and Mexico, according to the GAC.