发布时间：2021.09.07
信息摘要：
Brazil's beef export to China is suspended, Argentina's export ban is delayed, who will fill the gap in imported beef?

The Department of Agriculture and Animal Husbandry Protection of the Brazilian Ministry of Agriculture issued a statement on Saturday 4th confirming the discovery of two cases of atypical "mad cow disease". According to the health agreement signed between Brazil and China, Brazil's beef exports to China will be suspended, and the measure will take effect this Saturday.


The Department of Agriculture and Animal Husbandry Protection of the Brazilian Ministry of Agriculture issued a clarification statement on Saturday 4th, confirming that two atypical cases of bovine spongiform encephalopathy (BSE) were found in the slaughterhouses of Nova Cana? do Norte (MT) and Belo Horizonte (MG). The disease is called "mad cow disease". Based on a cautious attitude, according to the latest news from Brazil: Brazilian officials have asked all slaughter plants to suspend cattle slaughter operations, and the recovery time is unknown. 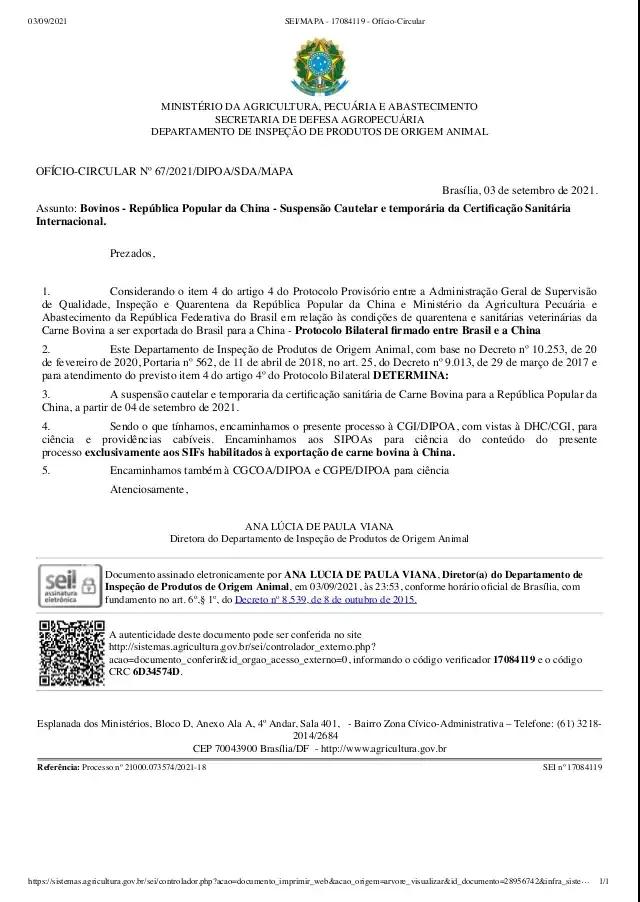 On September 6, 2021, the General Administration of Customs updated the "List of Meat Products Exported to China from Countries or Regions that Meet the Requirements for Evaluation and Review", and Brazil voluntarily suspends the export of beef products to China starting on September 4, 2021. Argentina extends beef export ban until the end of October

(Argentina Chinese Network, August 31) Through Resolution No. 7/2021 signed by the Ministry of Agriculture, Livestock and Fisheries and the Ministry of Social Development, the Argentine government extended the beef export ban to October 31.

The resolution explained: "In terms of prices, temporary export sales restrictions have begun to show positive effects. After two months of measures, (domestic) beef prices have stabilized, and even prices in certain chains have appeared to a certain extent. Contraction."

The resolution said: Therefore, it can be seen that the measures taken have achieved the goal of reducing dynamic prices. "Although the structural solution to the tension between the external and internal markets is related to measures to increase products, in the short term, in the event of a sharp increase in consumer prices, measures to restrict foreign sales are essential to ensure that the Argentine people have access to beef. "The extension of the export ban means that the export volume during this period shall not exceed 50% of the same period last year.

Who will fill the beef gap? How about the later price?

In 2020, China's beef imports come from 29 countries including Brazil, Argentina, Uruguay, Australia, and New Zealand. Among them, Brazil is the largest source of imports, with an import volume of up to 848,400 tons, accounting for 40%.

United States: Due to the impact of local inflation, market data shows that in September, beef futures on the Chicago Board of Trade hit a new high since 2016.

The proportion of Uruguay and Russia's exports to China has reached a record high. If Brazil's beef imports cannot be liberalized in the short term, there will be a significant supply gap in the imported beef market, which will be difficult for other countries to quickly replenish. In the second half of the year, facing China's peak consumption season, beef prices have a clear upward trend.